Executive Warfare: 10 Rules of Engagement for Winning Your War for Success

Home/Whatever you are, be a good one./Executive Warfare: 10 Rules of Engagement for Winning Your War for Success

Executive Warfare: 10 Rules of Engagement for Winning Your War for Success 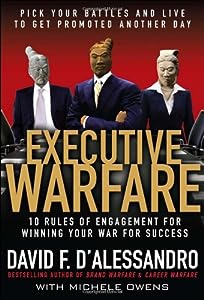 In Executive Warfare, David F. D’Alessandro provides excellent advice on how to climb the corporate ladder but like Career Warfare and he offers little guidance that I would characterize as attacking, taking the battle to the enemy or taking the offensive.  He provides ample advice on watching your back and disposing of disloyal employees, but does not spend much time on strategies to attack, sabotage or undermine one’s enemies.  In general, his approach is study hard, generate revenue, be a steady incremental player, patiently grow a talented team, and of course, play defense.   He writes:

Defense at this level is largely about trying to figure out where the ball is going.  You are certain to run into some very manipulative people.  If you fail to anticipate what the others are doing, you are not a player.  You are why they invented bleachers.”

I really like David’s books. They are interesting to read and provide superb advice.  In the back of my mind, I think about Jeffrey Pfeffer’s caution about books written by successful leaders:  be aware that those who won are able to write the story about how they won.   So it may be that David has left out some of the more interesting stories where he may not have acted as virtuously as the stories he describes in book – a minor infraction, if it is one.  The advice he gives is excellent and if there are more stories that he left out of the book, so be it.

In my experience, the single greatest reason why talented people get stuck in mid-careers because they believe the same rules applied to the first part of the career still apply. They don’t. You now have to master much subtler set of rules.

This struck me as particularly true.  Working hard and delivering good results only gets you so far.   The story of Cinderella is that a virtuous person worked hard and a charming prince came to her and they lived happily ever after.   Cinderella is a fairy tale, yet many people operate with the implicit assumption that if they are virtuous and work hard, they will be rewarded.  Life does not always work that way.  As Abraham Lincoln said, ““[t]hings may come to those who wait, but only the things left by those who hustle.”  To avoid the Cinderella trap, you must master a different set of rules.

David outlines 10 rules of engagement but provides many good rules along the way.  These are my top seventeen pieces of advice.

3.       Get used to being scrutinized and being a target.  David highly recommends keeping your personal life private or it will come back to haunt you.  Be standoffish on the social front.  Have an occasional group dinner but do not have your social life revolve around the office.

4.       Understand that your relationship with your boss is a business transaction.  They will treat you well as long as you are useful to them.  David comments that it is not likely that you will go to the funeral of someone you spent 10 years with between the ages of 30 and 40.  I would disagree with that.  I have had good relationships with my bosses and would attend any one of their funerals, if I could.  Unfortunately, I have kept in touch with many, but I wish I had and if I found out that one had died, I certainly would go to the wake and possibly the funeral.

5.       Make things happen for your boss.  Your goal is to be most trusted person in the boss’s stable.

6.       “Get into the right meetings, or you may as well stay home.”  David again stresses the importance of meetings – both being in the right meetings and presenting well when you are there.  David recommends asking to present your work at key meetings or finding another way in.

7.       Build relationships with as many superiors as possible.  Bosses can disappear overnight and you do not want to be tied too closely to one person.  Cooperate your counterparts in other parts of the organization.  If they rise, they will remember you favorably.  This is similar to John Kotter’s advice to build lateral relationships, although for different reasons.  John Kotter argues that with the growing complexity of organizations, getting most projects completed successfully requires the cooperation of people in other parts of the organization.

9.       Use disinformation to uncover your enemies.  If an enemy is spreading rumors about you or your organization, tell them a lie.  If he repeats it to discredit you to higher-ups, it will be shows to be untrue and will then discredit the enemy.

10.   Defeat rivals with a siege, not a coup.  Be a steady incremental player and you will win in the end.  Understand that the competition is always on because a power shift can happen at any time.  Patiently prove that you are better than your rivals.

11.   If you must shoot, shoot to kill.  Machiavelli advised to never make an enemy unless you kill them.  David and Machiavelli agree on this point.  Don’t just wound someone and leave them around to avenge themselves when you aren’t looking.  If you make an enemy, kill them.

12.   Get rid of snakes in your nest.  David warns that you should terminate anyone who is disloyal, undermines your initiatives, or tries to undermine you.  Get rid of people who don’t share information, don’t bring information to you, or stall or thwart your initiatives.  And if a former rival reports to you, either show him/her appropriate respect or, in most cases, the safest thing to do is to eliminate them.

13.   If you lose out on a promotion to a rival, either learn to eat crow or leave.  There are few real contenders who can bear to report to a former rival.

14.   Patiently build a group of highly capable people who get results.  The more you rise, the more you will be judged by your team.  And  you need to be seen as a positive force and for them to say positive things about you.

15.   Loyalty is about gratitude, not patriotism.  David says you build loyalty by helping your team members get to where they want to go.  He believes the chit system beats networking.  Do favors for people and they will return the favors when you need it.  This is similar to Adam Grant‘s approach in Give and Take.

16.   Generate Revenue.  David notes that people who bring in revenue have a decided advantage over those who don’t.

17.   Develop personal presence.  You notice who creates a dramatically different more positive aura when s/he enters the room, even if you back is to the door.  That one is the leader.

Is Career Warfare the Way to Get Ahead?