Why I love Dorie Clark

Why I love Dorie Clark 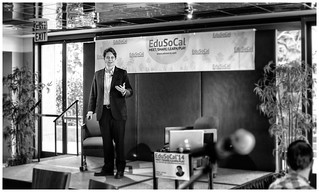 First of all, I have to admit that I’ve never met Dorie Clark.  To be fair, it would probably more accurate to say that I like,respect and admire Dorie Clark’s work.  But that would be an understatement.

Several years ago, I started reading Dorie’s stuff on on Harvard Business Review and on Forbes and I was really impressed.  I thought her article  A Campaign Strategy for Your Career was brilliant.  As a former campaign worker for a number of candidates, I really liked how she suggesting defining your goal and developing a plan to get there including a plan to influence the people who needed to be influenced.  I forwarded it to several colleagues.

I loved her “Shy of the Social Media Spotlight? Get over it.” although I will note that it is easier to say “Get over it.” than it actually is to get over it.  I still haven’t stuck my neck out very far.  I started this blog because I thought it would be a great place to keep track of articles and books that I liked and to highlight key points that I wanted to remember,  I had read Management Time: Who’s Got the Monkey? by William Oncken, Jr., and Donald L. Wass  almost 30 years ago and thought it was great.  So I kept a paper copy and I starting keeping a paper copies of magazine articles that I particularly liked including How May I Help You? and It Doesn’t Take A Wizard to Build a Better Boss.  But keeping, storing and retrieving paper copies of articles and books was not easy, and the possibility of doing it electronically seemed ingenious.  I started this blog to keep notes about and links to articles and books that I especially liked.  So I haven’t fully acted on Dorie’s advice to get over it, but I recognize its wisdom and I’m working on it.

I also loved How to Become a Thought Leader in Six Steps.  One of my goals is to become a thought leader.  I’m still working on this, too.  On Dorie’s recommendation, I bought Ready To Be A Thought Leader? by Denise Brosseau.  I read it and working on incorporating its guidance.

And of course I bought and loved her book Reinventing You: Define Your Brand, Imagine Your Future which I have read twice and will write about in this blog in the near future.

So I’ve been an admirer of Dorie’s for a long time, but what prompted me to write about it was what happened earlier this year.   In addition to this blog, I work on a blog Job Search Infographics where I share infographics related to job hunting,  In a post on February 12, I wrote “Many people start in one field and make several career changes (see Dorie Clark‘s Reinventing You for a great book on how to reinvent yourself and change your career). ” A few days later, I see this tweet:

“The Ultimate Guide for Those Considering a Career in Accounting” – @NathanSGibson – thx for the mention: http://t.co/hF2pDVrxog

So my little blog that may have a total of 1,700 all-time views gets tweeted to her  almost 17,000 followers.  Wow.  Then in March, it happened again.  In a different blog post, I wrote “as Dorie Clark wrote in Reputation 3.0: The Internet Is Your Resume, what can be found about you online (your personal e-reputation) may be more important than your resume and may significantly affect your ability to get a job.”  Again, a few days later:

Managing Your Personal E-Reputation – #infographic from @NathanSGibson with thanks! http://t.co/IpK1lYhOgo #PersonalBranding

I was and continue to be impressed.  I have posted maybe 150 blog posts over the past couple of years and rarely have I had someone tweet about them (except me, of course).  And then I remembered that in Reinventing You, Dorie told a story in which she mentioned David Allen, author of Getting Things Done, in an article she wrote for the Huffington Post.  A few days after writing the article, David emailed her and they have kept in touch.  Essentially, she did what she had talked about in her book.  She walked the walk.
So if you are interested in personal branding, you should read and follow Dorie Clark.  Read her blog pieces  follow her on Facebook and Twitter, and of course, buy Reinventing You: Define Your Brand, Imagine Your Future.  Read what she writes, do what she does.  There are many good resources for personal branding, reputation management, and guidance.  But Dorie is exceptional.