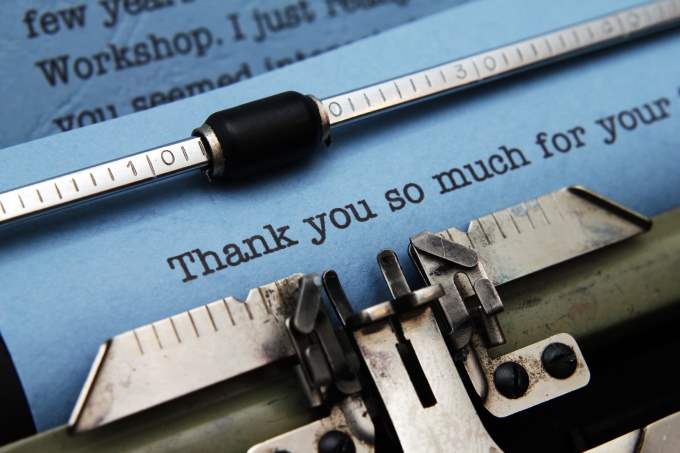 From Fast Company, Stephanie Vozza discusses the importance of expressing gratitude in the workplace.  Not only does gratitude have benefits in the workplace but being grateful also improves your own happiness (see New Neuroscience Reveals 4 Rituals That Will Make You Happy).  You should express gratitude for your own sake and because it strengthens teams and motivates employees, as Stephanie explains:

Gratitude takes people outside of themselves and to a place that is part of a larger, more intricate network of sustaining relationships, says Emmons, relationships that are mutually reciprocal. “In this sense, it, like other social emotions, functions to help regulate relationships, solidifying and strengthening them,” he says.

Gratitude also leads to reciprocity. “It is not only a response to kindnesses received, but it is also a motivator of future benevolent actions on the part of the recipient,” says Emmons. “Serving these functions, gratitude enhances our own well-being in that we are built for relationships,” he points out. “Gratitude is the high-octane fuel that, without which, we’d be in relational ruin.”

IT’S A BETTER MOTIVATOR THAN MONEY

Researchers from the London School of Economics found that financial incentives can backfire when it comes to motivating employees. An analysis of 51 separate experiments found overwhelming evidence that “incentives may reduce an employee’s natural inclination to complete a task and derive pleasure from doing so.”

Appreciation is a much better motivator. A study by Glassdoor found that 80% of employees would be willing to work harder for an appreciative boss, and 70% said they’d feel better about themselves and their efforts if their boss thanked them more regularly.

A study done at the Wharton School at the University of Pennsylvania underscores this point. Researchers divided participants into two groups, and asked them to make fundraising calls to solicit alumni donations. One group followed the traditional method of making calls while another group was given a speech by the director of annual giving, who expressed gratitude for their efforts. The group who received the pep talk made 50% more fundraising calls than those who did not.