The Parents Guide to Grit

The Parents Guide to Grit 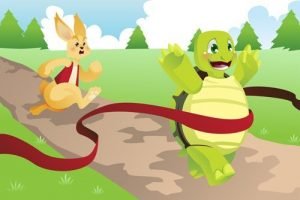 We’ve all heard or read “The Tortoise and the Hare.” The hare and tortoise race, and the tortoise wins because the hare, although much faster, gets cocky and takes a nap. He wakes up just in time to watch the tortoise cross the finish line. This may have been the first literary example of grit and how it can often supersede skill.
The concept of grit is very simple. Angela Duckworth, a former middle school and high school math teacher and current psychology professor at the University of Pennsylvania, defines grit as “sticking with things over the very long term until you master them.”

In a profile of Duckworth for America Public Works, there is a reference to a paper she co-wrote where she described those with grit as ones that consider achievement to be a marathon, so they have more stamina in order to reach their goals. Using her experience as a teacher and education as a psychologist, she realized that those with grit who try the hardest often are the ones who succeed in the classroom and in life.

Duckworth first introduced the concept of grit in 2007, and there have been a number of pedagogy researchers who have followed her since to support her claims and bring grit to the mainstream. If you are a parent, you may be wondering if there are ways to help your child become grittier.

The answer to this is yes. Grittiness can be developed, but it does take time and perseverance. Here are several tips provided by Duckworth, herself, and other parents from a Parent & Child Magazine article.

For more information about grit, parents and teachers are encouraged to visit the Grit page of this website. This resource page from Nathan S. Gibson includes a number of articles, studies, and more from the leading experts in pedagogy on grit, creative problem solving, and other issues in education.